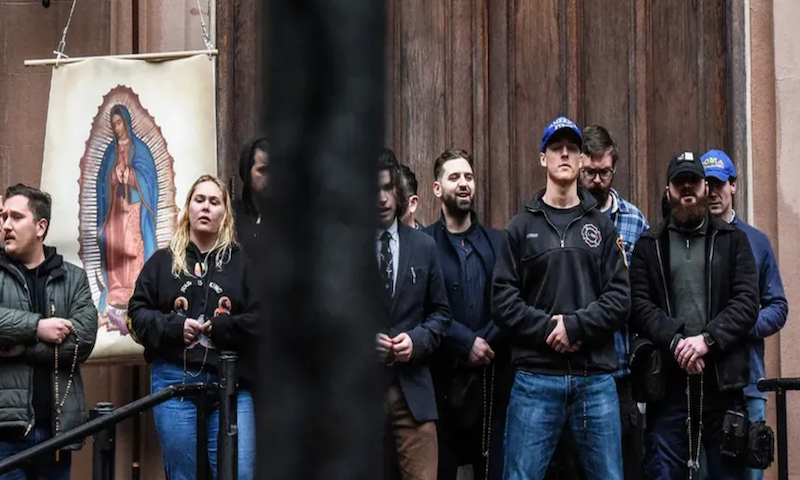 On Aug. 18, the Catholic-right media outlet Church Militant featured a half-hour interview with John Doyle, a young YouTube streamer who drew national attention this June for helping to lead a uniquely ugly protest against an LGBTQ Pride Month event in downtown Dallas. The 22-year-old Doyle, whose YouTube show "Heck Off, Commie!" has an audience of some 300,000 subscribers, has openly referred to himself as both a "white nationalist" and "Christian fascist." But to his interviewer, Church Militant founder and president Michael Voris, he was a "saint in the making." And as the conversation brought Doyle's message to a new and different audience, the alignment of right-wing Catholicism with some of the most extreme voices on today's far right only grew.

For years, Church Militant has served as an angry gadfly within the world of right-wing Catholicism, objecting not just to moderate and progressive Catholics and Pope Francis, whom the outlet sees as a heretical liberal, but also to more mainstream conservative Catholic outlets it views as insufficiently critical of church hierarchy.

For his part, Doyle is a prominent member of online far-right youth circles aligned with the white nationalist America First/groyper movement and its leader, the gleefully racist and antisemitic livestreamer Nick Fuentes, with whom Doyle led a "Stop the Steal" protest in 2020. On his livestream show, where Doyle promotes an authoritarian form of Christian nationalism, he has attacked figures like Martin Luther King, Jr., claiming that "being assassinated was like the best thing that could happen to him" and said that "the destruction of white racism is ultimately code for the destruction of American society." Last October, Doyle taunted students at the University of North Texas by asking, "What is wrong with Christian fascism?" and warning that "when we and all my friends take power, bad things are going to happen to you."

In February, Doyle appeared as a special guest at Fuentes' third America First Political Action Conference (AFPAC III) in Orlando, alongside far-right politicians like Rep. Marjorie Taylor Greene and Arizona state Sen. Wendy Rogers, who called for hanging the movement's political enemies. In April, after keynoting an event hosted by the University of California, Santa Barbara, chapter of Turning Point USA, Doyle praised the group for being brave enough to invite "white nationalists" like "yours truly" to speak.

And this June, as Salon reported, Doyle attacked a family-friendly drag queen brunch at a Dallas gay bar, declaring that LGBTQ people are "the symptom of a dying society," that he aimed to take away "every single one" of their rights and that Texas sheriffs should enter the bar "and put bullets in all their heads" because "That's what the badge is for."