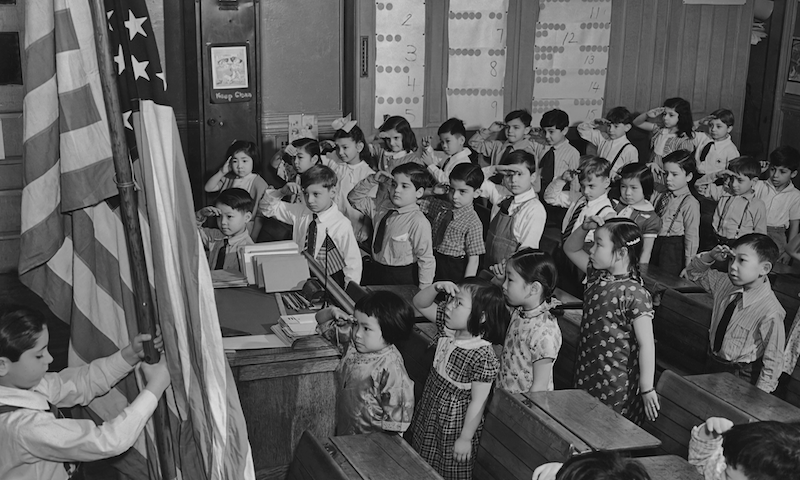 A group of children saluting the American flag at a school in the Chinatown area of Manhattan circa 1960. - Keystone View/FPG/Getty Images

On the morning of March 17, Liz Kleinrock contemplated calling out of work. The shootings at three Atlanta-area spas had happened the night before, leaving eight dead including six women of Asian descent, and Kleinrock, a 33-year-old teacher in Washington, D.C., who is Asian-American, felt the news weighing on her heavily.

But instead of missing work, she changed up her lesson plan. She introduced her sixth graders over Zoom to poems written by people of Japanese ancestry incarcerated during World War II. Her lesson included “My Plea,” printed in 1945 by a young person named Mary Matsuzawa who was held at the Gila River Relocation Center in Arizona: “I pray that someday every race / May stand on equal plane / And prejudice will find no dwelling place / In a peace that all may gain.”

“I feel like so many Asian elders have been targeted because of this stereotype that Asians are meek and quiet and don’t speak up and don’t say anything, and therefore that makes our elderly easy targets,” Kleinrock said to TIME by phone, speaking of the purpose of the lesson. “And so it’s so important to be loud and to bring attention to this. Education is so important. If we don’t know our history, then we’re doomed to repeat the same thing over and over again.”