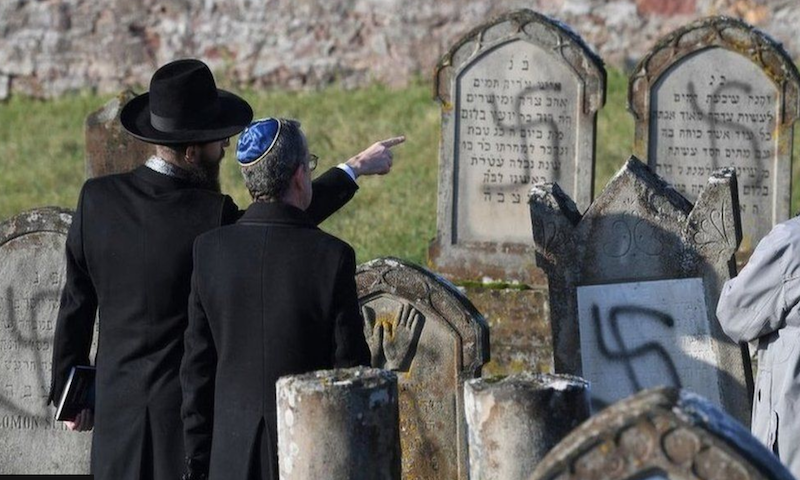 BBC - The number of anti-Semitic incidents around the world dramatically increased last year, a study by Tel Aviv University has found.

The report identifies the US, Canada, the UK, Germany and Australia as among countries where there was a sharp rise.

This was fuelled by radical left- and right-wing political movements and incitement on social media, it says.

Known in Israel as Yom HaShoah, the day commemorates the six million Jews murdered by Nazi Germany across Europe during World War Two.

The Anti-Semitism Worldwide Report 2021, by the Center for the Study of Contemporary European Jewry at Tel Aviv University's Faculty of Humanities, is based on the analysis of dozens of studies from around the world, as well as information from law enforcement bodies, media and and Jewish organisations.

It says that in 2021 there was "a significant increase in various types of anti-Semitic incidents in most countries with large Jewish populations".

The report's authors blame in part reactions to May 2021's fighting between Israel and Palestinian militants in the Gaza Strip for the rise in anti-Semitic incidents.

The report also calls out "the vast reach of social networks for spreading lies and incitement".

"The data raise concerns regarding the utility of legislation and agreements reached with social media companies on banning anti-Semitic expressions from their platforms."

"The gravest concern is the dark web, which shelters extremists and where anti-Semitic content is freely and openly spread," it warns, referring to a part of the internet only accessible through special browsing software.

"Right at the outset of the pandemic in 2020, conspiracy theories began to sprout around the world, blaming the Jews and Israel for spreading the virus," it says.