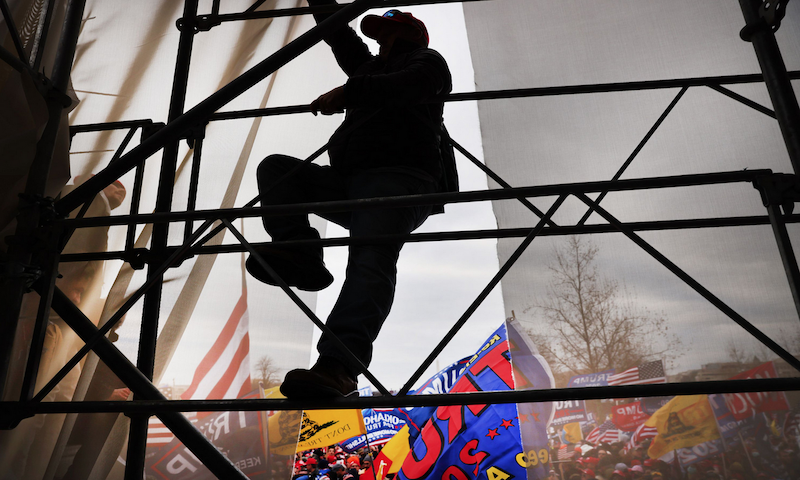 Politico - Over the past year, extremism has gone mainstream, creating a new — and tougher — counterterrorism challenge for the U.S. government.

One year out from the Capitol insurrection of Jan. 6, 2021, how worried should we be about far-right extremism in the United States? After that tragic day, many analysts (including myself) predicted we’d see a surge in violent attacks throughout the rest of the year. This didn’t happen — but in its place, something arguably more worrisome has occurred.

Rather than a spate of attacks by organized groups — largely what the Biden administration has prepared for — instead we have seen a massive expansion of the broader ecosystem of far-right extremism. I study terrorism and regularly monitor the rhetoric traversing Telegram and other platforms frequented by far-right extremists. Over the past year, it’s become clear that the violence underpinning the Capitol rioters’ ideology has seeped into mainstream culture and politics. As a result, many more people can — and do — engage in extremist thoughts and actions, not just members of groups like the Proud Boys and Oath Keepers. This raises risks of violence by radicalized “lone wolves,” who are much harder to track and thwart.

What some scholars call “mass radicalization” — the mainstreaming of extremism beyond a more organized core — presents a different sort of counter-terrorism challenge for the Biden administration. Rather than playing defense through a law enforcement-driven approach, the administration needs a comprehensive strategy that cuts across different parts of society to weaken the growing pool of extremists prepared to use violence to advance their ideological goals.

Remarkably for a year that started off with an unprecedented display of political violence, 2021 saw zero major terrorist attacks on U.S. soil, nor did we experience anything resembling the 2017 Unite the Right rally in Charlottesville, Va. One reason is that the ongoing Covid-19 pandemic has artificially suppressed terrorism plots and attacks that we might have seen otherwise. At the same time, lockdowns, isolation and stress have exacerbated many of the underlying factors that contribute to extremism, while also making mental health matters more acute. Meanwhile, 2020 and 2021 were record years for the sale of weapons and ammunition. Americans are anxious, angry and well-armed — a combustible combination.

Another reason for fewer incidents of domestic terrorism during 2021 is that far-right extremists, both individuals and formal organizations, have likely been cowed by an aggressive law enforcement response to Jan. 6. To date, more than 700 individuals have been charged with federal crimes for their role in the insurrection. The city of Washington, D.C., has sued the Proud Boys and the Oath Keepers, seeking severe financial penalties. Given how paranoid many far-right extremist groups are about being infiltrated by law enforcement, many have gone underground and attempted to drop off the grid to avoid further entanglement with the authorities.

However, it would be a mistake to conclude that the problem has faded away. Though we haven’t seen the most visible signs of growing extremism, a more extreme climate is permeating our society, culture and politics. Far-right talking points about election interference and comparisons of public health officials to Nazis are now part of mainstream political dialogue among Republicans. National Institute of Allergy and Infectious Diseases Director Anthony Fauci needs around-the-clock personal security for him and his family, who regularly receive death threats. In November, Rep. Paul Gosar (R-Ariz.) tweeted an anime video that depicted him murdering his Democratic colleague Alexandria Ocasio-Cortez (D-N.Y.) and swinging swords at President Joe Biden. Slogans like “Let’s Go Brandon,” a euphemism for more vulgar language denigrating the president, are commonly seen on everything from bumper stickers to baseball caps. Whereas terrorism analysts are used to seeing violent language on niche platforms like Parler, it’s far more unusual for the discourse to spill into statements by elected officials and political candidates.