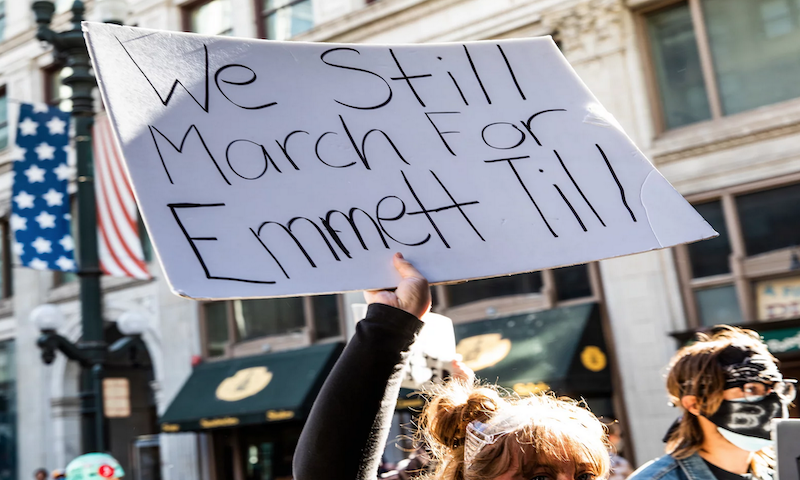 NPR - After multiple failed attempts across twelve decades, there is now a federal law that designates lynching as a hate crime. In a Tuesday ceremony at the White House, President Biden signed the Emmett Till Antilynching Act into law.

"Racial hate isn't an old problem. It's a persistent problem," Biden said. "Hate never goes away, it only hides under the rocks. If it gets a little bit of oxygen, it comes roaring back out, screaming. What stops it? All of us."

Under the legislation, perpetrators can receive up to 30 years in prison when a conspiracy to commit a hate crime results in death or serious bodily injury.

Vice President Kamala Harris said that lynching is "not a relic of the past."

"Racial acts of terror still occur in our nation. And when they do, we must all have the courage to name them and hold the perpetrators to account," she said.

The measure is named for Emmett Till, a 14-year-old boy who was abducted, tortured and killed in 1955 after the Black teenager was accused of whistling at and grabbing Carolyn Bryant, a white woman, while visiting relatives in Mississippi. Roy Bryant, Carolyn Bryant's husband, and J.W. Milam, Roy Bryant's half brother, were tried for Emmett's murder and were quickly acquitted by an all-white jury.

The men later admitted in a magazine interview to murdering Emmett. Carolyn Bryant told an historian 50 years after the crime that Emmett had never put his hands on her.

Rev. Wheeler Parker, the last living relative of Emmett's to witness his abduction, was at the signing ceremony.

"Now, people can no longer get away with things that they got away with in the past," Wheeler told NBC News. He said the law "gives power to the people who are seeking justice and trying to do the right thing."