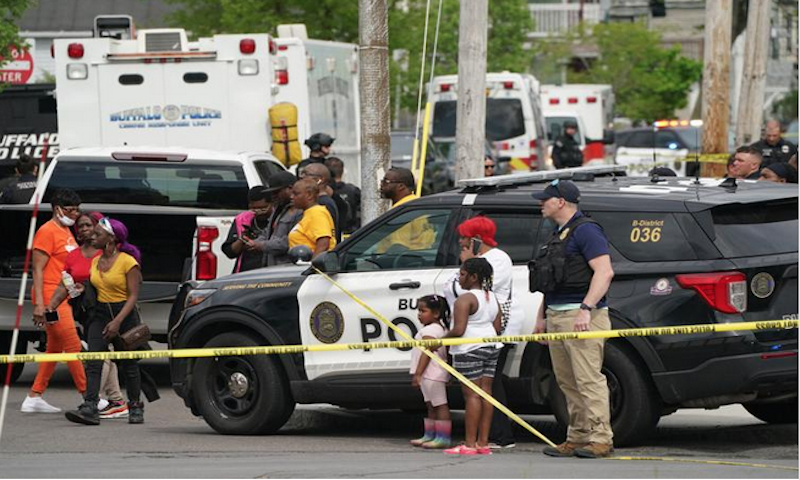 Buffalo News - A racially motivated hate crime spilled the blood of 13 people, leaving 10 of them dead, in Buffalo on Saturday, authorities said.

"This was pure evil: a straight-up racially motivated hate crime from somebody outside our community, outside of the city of good neighbors," Erie County Sheriff John Garcia said.

Ten people were gunned down at a Buffalo supermarket Saturday in a horrifying mass shooting that officials were quick to label as "pure evil" and racially motivated. The shooting stunned a community basking in a warm May afternoon, with shoppers filling the Tops in a predominantly Black neighborhood at 1275 Jefferson Ave.

And not surprisingly, then, the mass murder in Buffalo's African-American community – and the 18-year-old accused of committing it – quickly came to be seen as something even larger than an unprecedented Buffalo tragedy. They came to be seen by those who study white supremacy as symbols of a growing racist ideology that explodes in gunfire in seemingly random events connected by only hatred and bloodshed.

The accused shooter, Payton S. Gendron, 18, of Conklin, near Binghamton, was arraigned on a murder charge Saturday, and sources said he is also likely to face federal hate crime charges, which could, under federal law, mean Gendron could spend his life in a federal penitentiary. The federal hate crime statute allows suspects to be charged in federal court when their motive involves race, religion or any of several other defining characteristics.

Gendron appears to have left evidence for any hate crime charge by publishing a 180-page manifesto spelling out his white supremacist philosophy. Even before law enforcement confirmed the authenticity of the manifesto, national experts in white supremacism and racism were poring over its pages for evidence.

"The manifesto is 180 pages long, but dozens of pages are nothing more than anti-Black and anti-Semitic memes and statistics and almost 100 pages contain mind-numbingly boring info about every piece of equipment he considered taking on his shooting spree," tweeted J.J. MacNabb, a fellow at George Washington University's program on extremism.

After reviewing the manifesto, MacNabb also tweeted: "The shooter chose his target because it has a higher percentage of black Americans than other nearby areas."

The Anti-Defamation League said the manifesto indicated that the suspect believes in the "great replacement theory," a white supremacist conspiracy theory that alleges an attempt to replace White Americans with immigrants and people of color. Other adherents of the great replacement theory have been charged in mass murders at a Pittsburgh synagogue, an El Paso, Texas, Walmart and two mosques in Christchurch, New Zealand.