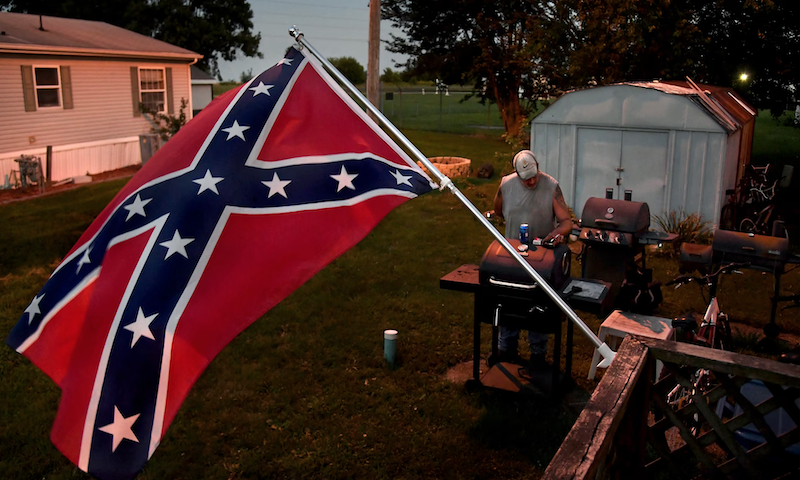 The United States of Confederate America

By David A. Graham

The Atlantic - Several years ago, I was driving on a rural road when I came up behind a pickup truck with a Confederate-flag sticker on the back window. This isn’t such an unusual sight in some parts of the United States, but this instance surprised me: The truck had Pennsylvania plates, and the road was in Gettysburg, where an invading force of tens of thousands of Confederates, formed to defend Black slavery, arrived in summer 1863 on a pillaging expedition.

But though the Civil War was a battle between two regions of the country, sympathy for the Confederacy is no longer confined to states that seceded and border states. Support for Confederate symbols and monuments now exists across the country, following lines of race, religion, and education rather than geography. This is one of many ways in which the South is no longer simply a region: A certain version of it has become an identity shared among white, rural, conservative Americans from coast to coast. That’s one takeaway from a new survey about Confederate symbols from the Public Religion Research Institute and E Pluribus Unum.

“We’ve had hints of this in the ways that campaigns get run: It used to be that all politics are local, and it’s seeming more like all politics are national,” Robert P. Jones, the president and founder of PRRI, told me. “When you look at the predictors on Confederate monuments, they are much more about race and partisan affiliation and education levels than they are about region.”

Where things get interesting is when the survey measures support for reforms, whether destruction of these markers or removal to a museum: Across race, party, and education levels, numbers diverge, but views about reform are nearly identical in the South and in the rest of the country. Nearly identical portions of southerners and Americans elsewhere (22 percent versus 25 percent) back reform, and nearly identical portions oppose it (17 percent versus 20 percent). The remainder are split between leaning one way or another, again closely mirrored. In other words, non-southerners feel the same way about Confederate monuments that southerners do.

This would surely come as a surprise to the men who professed fidelity to state and region above national identity when they sided with the Confederacy in 1861. But it’s the product of a dynamic in which white, rural Americans around the country have adopted the culture of white, rural southerners. This is only one piece of the region’s heritage, a rich, cosmopolitan, and multiracial mix that has shaped the entire country’s music, food, and culture, though it is also the one that has become the go-to stereotype of the region’s identity.