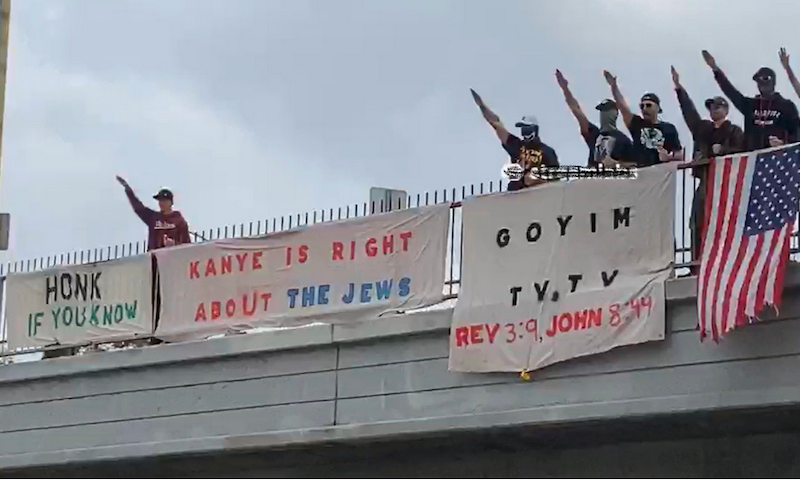 Fast Company - In the past several weeks, Kanye West—or Ye, as he is now known—has come under fire for anti-Semitic remarks released on his social media as well as in a string of news interviews. Despite the indignant cries of Kanye West fans and apologists, who cite his mental illness as an excuse for this behavior, hate groups like the anti-Semitic Goyim Defense League were quick to capitalize on the massive social media reach of the musician and parade their hate on- and offline.

The signs in the image above hung over the 405 freeway in Los Angeles, a typically liberal and progressive city. It sent shockwaves through the country as yet another reminder that white supremacy is alive and well in pockets of the country. But it’s also a reminder to me that “white supremacy,” as an ideology, has a much longer and more complex history than the blatantly racist pageantry of hate groups would suggest.

What is white supremacy?

White supremacy is a term that tends to offend people’s sensibilities much more immediately than the word racism. That’s because white supremacy today presents itself to the American consciousness in offensive, alienating forms. The KKK, hate crimes, neo-Nazis, and now the Goyim Defense League in the photo above—these are the proud examples of white supremacy in the 20th and 21st centuries. Most people condemn them unequivocally, and they have become a sort of sinister “other,” against which non-racist people may define themselves.

The truth is, white supremacy has a much longer, much uglier history than contemporary white supremacists would suggest. As a pseudoscientific theory of race, a justification for worldwide colonialism and imperialism, and eventually an explicit call to mass genocide, white supremacy has been responsible for some of the most heinous crimes against humanity in modern history.

As a result, it leaves behind an ugly legacy that stretches across much of our society, including law, politics, economic policy, education, arts and culture, and even language. White supremacists may have diminished in number, but the historical effects of white supremacy have a much longer tail.

The history of white supremacy runs long and deep. And even though the ideas behind it are no longer socially acceptable, it still guides racially biased thinking in almost every field of human experience. The strength of its influence on earlier periods in history is reflected in the ubiquity of its legacy today.

A few weeks ago, I wrote about the cultural white supremacy implicit in the backlash against a Black actress playing the live-action Little Mermaid in 2023: Halle Bailey. To me this is a subtle example of white supremacist gatekeeping when it comes to arts and culture. Even fictional characters have to adhere to our very real sense of racial hierarchy. But in this domain, you could also think about our Eurocentric approach to history, literature, and art in schools and museums, which inevitably privilege Western art. Even tokenism—the practice of symbolically adding characters of color into works of art as a superficial nod to racial equality—could be viewed as an aftereffect of white supremacy.I’ve also written about cultural appropriation in the past—to me, the practice of borrowing or stealing from other cultures’ artistic output for profit is a perfect example of white supremacist imperialism still in action. Western (and particularly American) culture remains globally dominant: to assimilate other cultures into its systems of power without due credit or profit-sharing is a practice steeped in white supremacist ideology.

The economics of white supremacy

As an ideology that privileges whiteness and white people’s well-being, white supremacy has also had economic effects on our society. The old practice of “redlining” is a classic example: Mortgage lenders used to (literally) outline African American neighborhoods in red and mark them as higher risk. These neighborhoods did not receive comparable benefits from the various housing and mortgage programs of the New Deal in the 1930s. As a result, Black neighborhoods stayed Black, relatively poor, and unable to access good credit. Discriminatory lending of this kind was one of the major issues addressed by Civil Rights legislation in the 1960s, and it originates in a white supremacist logic of economic exclusion.I myself have experienced this as a Black founder; just this past quarter, Black founders received a paltry $187 million in funding (0.43% of the $43 billion deployed in Q3 2022). There are many reasons behind this kind of inequity, but most of them are rooted in disparities of access to capital, education, wealth, and entrepreneurship—most of which trace their roots back to white supremacist ideas as well. Perhaps the most significant of these is the continued wealth and income inequality between Black and white people, which has barely changed since the 1950s, when white supremacy supposedly came to an end.

White supremacy in politics and law

From a legal perspective, white supremacy was coded into Jim Crow laws almost as soon as the Civil War ended. These laws created a different America for Black people, in which it was far easier to be criminalized and much harder to gain wealth or access education. Segregation ended formally with the legal victories of the Civil Rights movement in the 1960s, but it continues in schools and housing up to the present day in more covert forms. The idea that Black and white people cannot share space is obviously a direct corollary of the white supremacist belief that white people are superior.

Politically, white supremacy has shown up more, and more overtly, since the growth of the Tea Party and its conversion into Trump’s presidential base of support. “Make America Great Again” is only the most memorable example. Trump calling COVID-19 the “Chinese” virus was equally white supremacist—not just because it’s a racist taunt, but because it designates Covid-19 as the creation of a foreign, hostile power rather than a globally shared public health crisis. The implication, of course, is that America—white America—was blameless in its response to COVID-19; all culpability lies with the unknown, but probably malicious, Chinese “Other.”

by Kathleen Davis for Fast Company