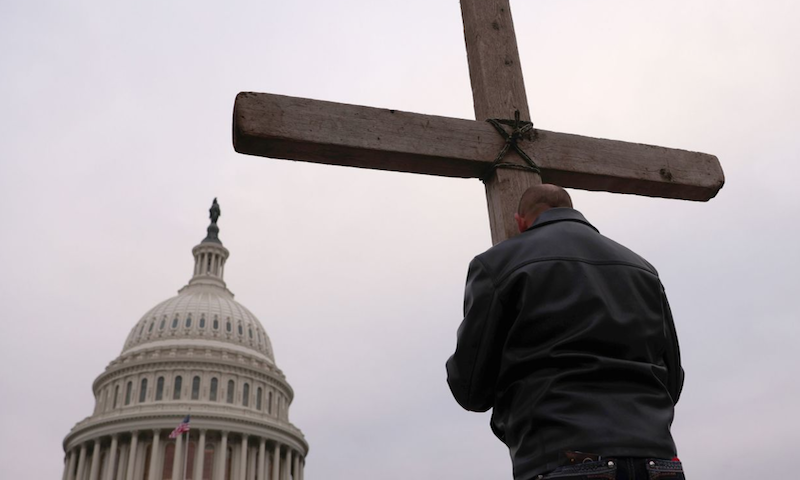 CNN - Three men, eyes closed and heads bowed, pray before a rough-hewn wooden cross. Another man wraps his arms around a massive Bible pressed against his chest like a shield. All throughout the crowd, people wave “Jesus Saves” banners and pump their fists toward the sky.

At first glance, these snapshots look like scenes from an outdoor church rally. But this event wasn’t a revival; it was what some call a Christian revolt. These were photos of people who stormed the US Capitol on January 6, 2021, during an attempt to overturn the results of the 2020 presidential election.

The insurrection marked the first time many Americans realized the US is facing a burgeoning White Christian nationalist movement. This movement uses Christian language to cloak sexism and hostility to Black people and non-White immigrants in its quest to create a White Christian America.

A report from a team of clergy, scholars and advocates — sponsored by two groups that advocate for the separation of church and state — concluded that this ideology was used to “bolster, justify and intensify” the attack on the US Capitol.

Much of the House January 6 committee’s focus so far has been on right-wing extremist groups. But there are plenty of other Americans who have adopted teachings of the White Christian nationalists who stormed the Capitol — often without knowing it, scholars, historians, sociologists and clergy say.

White Christian nationalist beliefs have infiltrated the religious mainstream so thoroughly that virtually any conservative Christian pastor who tries to challenge its ideology risks their career, says Kristin Kobes Du Mez, author of the New York Times bestseller, “Jesus and John Wayne: How White Evangelicals Corrupted a Faith and Fractured a Nation.”

“These ideas are so widespread that any individual pastor or Christian leader who tries to turn the tide and say, ‘Let’s look again at Jesus and scripture,’ are going to be tossed aside,” she says.

The ideas are also insidious because many sound like expressions of Christian piety or harmless references to US history. But White Christian nationalists interpret these ideas in ways that are potentially violent and heretical. Their movement is not only anti-democratic, it contradicts the life and teachings of Jesus, some clergy, scholars and historians say.

Samuel Perry, a professor of religious studies at the University of Oklahoma who is authority on the ideology, calls it an “imposter Christianity.”