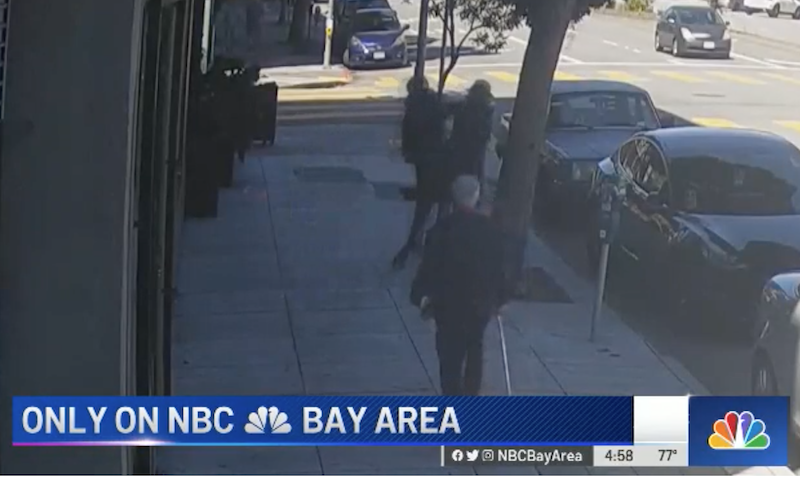 NBC - San Francisco police are searching for a man who attacked two women minutes apart in the city's Richmond district.

The assaults have left some businesses and residents even more afraid in a normally safe and quiet area that has now become the scene of the most recent attacks on the Asian community.

One of the attacks happened just past 11:30 a.m. Wednesday. Surveillance video shows a man in a black hoodie speaking to himself as he makes his way east on Geary Street. Another angle from a different surveillance video shows he turns around and points at an elderly woman wearing a hat. The woman glances at him and that's when the man turns and attacks, running her down and repeatedly punching her in the face.

A car alarm is set off as the woman falls, which caused the attacker to run away. A witness who ran out to help, but did not want to be identified, told NBC Bay Area the 65-year-old Asian woman was left with a bloody lip, bloody teeth, and damaged glasses.

The witness said what makes all this worse is the incident was the suspect's second attack.

The first attack occurred minutes earlier and was also caught on surveillance video. The same man is seen punching another woman - also believed to be Asian - as she crosses the street.

A nearby business owner said the attacks leave her even more afraid and even less sure about how to protect herself.

"If you carry pepper spray - what are we going to do if they're going to attack you? They're faster than us and we are only women," the business owner said. "What should we do?"