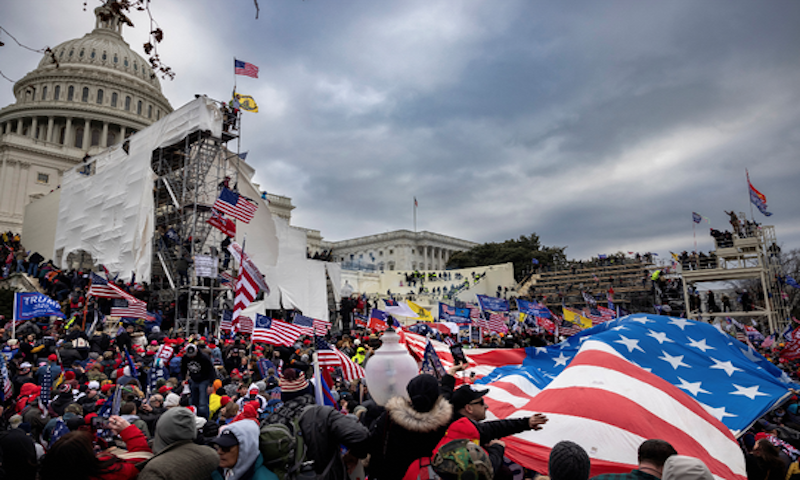 Politics, both domestic and international, have certainly changed over the last few years. It’s almost impossible to enter a discussion or read a report on current trends in foreign policy and national security without two points being raised: one that domestic extremist violence is now considered the top terrorist threat to the U.S. homeland, and two, that the world is entering a new era of great power competition. What is not frequently discussed is how these two trends are intricately linked, and how addressing one can aide the United States in the other.

Authoritarian governments, primarily led by Beijing and Moscow see themselves in competition with the United States for key relationships with countries around the world. For decades following the collapse of the Soviet Union, there was an assumption that the international standard for progress and reform was the adoption of democracy and liberal market reforms. Today, that is no longer the case. Authoritarian regimes are offering an alternative vision for how to organize society and for a government’s relationship with its people. Their proposition is simple: Yes, it may be more repressive and there are fewer freedoms than with liberal democracy, but it is also more orderly, efficient, and able to handle big problems.

But it is more than simply promoting their own model. Authoritarians also seek to tear down America’s comparative advantage in this this perceived battle of ideas, its self-proclaimed strength as a beacon of democracy, freedom, and equal rights. By doing so they are working to undercut the image America seeks to projects to the world, and the very idea promoted by Democrats like John F. Kennedy and Republicans like Ronald Reagan that America should serve as a shining city upon the hill. If the United States and democracy is not viewed as offering freedom, liberty, or equal rights, then it’s all a sham and the model that it professes is a sham too.

This is why foreign, authoritarian-run media covered the Jan. 6 attack on the U.S. Capitol so extensively and sensationally. Chinese State-owned outlets described it as an “internal collapse” of the American political system. Chinese outlets were even sent instructions for their coverage of the Capitol Insurrection to emphasize attacking democracy and promoting the idea that censorship is a superior political tool compared to freedom of speech. RT and Sputnik, Russia’s vaunted international propaganda outlets, similarly promoted such messages, covering the Jan. 6 insurrection with headlines describing it as “a date which will live in infamy,” “the date the Second Civil War began,” and “a symptom of a bigger problem.” The Russian government goes beyond simply promoting damaging messages in news coverage, but even tries to exacerbate racial tensions in the United States through its social media manipulation. It is home to leaders of American Neo-Nazi and extremist organizations. Russia’s disinformation networks also specifically target minority groups, especially African Americans, in their disinformation campaigns. There are even reports that Russian intelligence may be financing certain hate groups in the United States, specifically trying to push them towards violence.