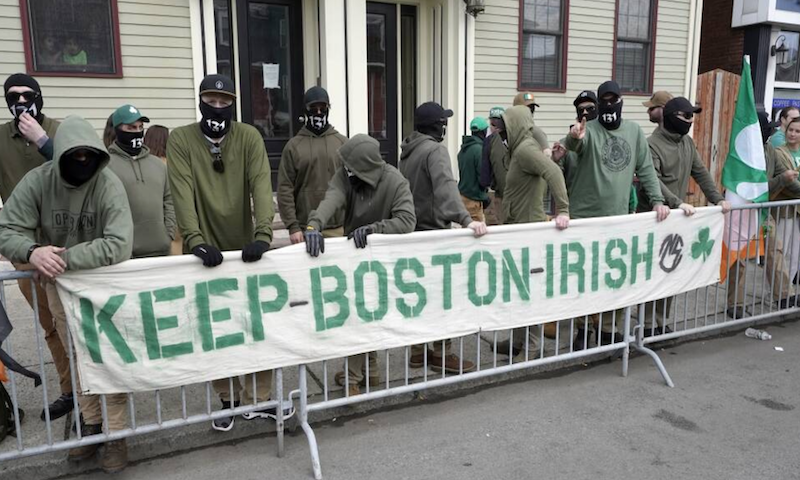 GBH - It was a rare look inside the strategic planning of an upstart neo-Nazi movement.

“If you’re in college you should be getting together with all the other guys on campus that think like you, circling all the frat parties and bullying the chicks that race mix and start dominating the party and take over the campus,” Hood said. “Same policy as out here [the street] but just do it on campus.”

Hood and MacNeil, now 23, are part of a tiny but growing group of white nationalists who have begun publicly announcing their presence across New England through a rising wave of racist and antisemitic demonstrations, attacks and vandalism. The groups appear to have escalated their activities in the wake of the Jan. 6, 2021, attempted insurrection in the U.S. Capitol, where members of these groups were present. It’s a rise that worries local law enforcement and community members, spurring them to respond.

In the wake of this weekend’s racially motivated murders in Buffalo — the latest among a series of hate-inspired mass shootings — experts on extremism say there is good reason to be concerned about the spread of neo-Nazism, racism and white ethnonationalism in New England.

In Massachusetts, the Anti-Defamation League counted 388 reported hate, extremism, antisemitism and terror incidents in 2021. Five years earlier, it tallied only 123 reported incidents. Much of this activity is graffiti or leafleting or other acts of racist propaganda. But some of it is violence.

Investigators last summer found antisemitic and racist writings taken from the internet in the home of Nathan Allen after he murdered two Black people in Winthrop.

In April 2020, John Michael Rathbun, now 38, was charged in federal court in Springfield with trying to blow up a Jewish assisted-living residence with a five-gallon gas canister. The federal government connected Rathbun to an unspecified white supremacist organization, and said that a user posted a message on one of the group’s social media channels suggesting an attack on “that jew nursing home in longmeadow massachusetts.” Rathbun of East Longmeadow was convicted on two federal arson charges and sentenced to five years in prison.