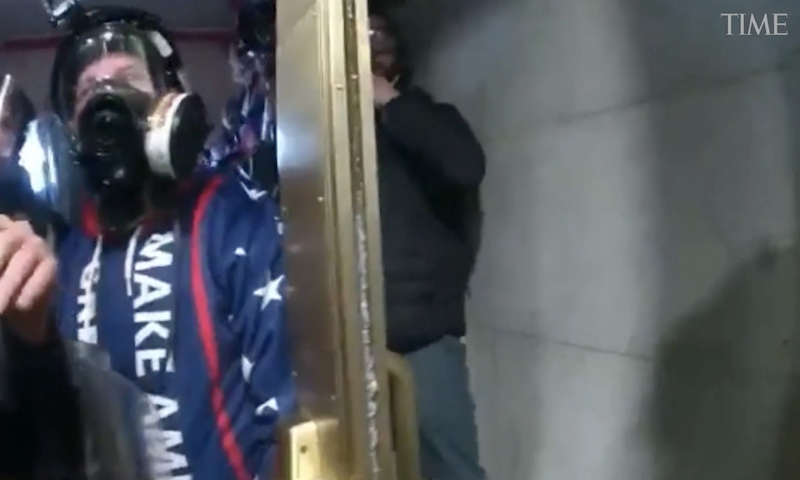 Time - A year after the horrifying violence at the Capitol on January 6th, 2021, a simple partisan storyline crowds out a central driver behind the events. Most media are understandably tracking the January 6 Committee and Trump’s Republican accomplices, and many pollsters have focused on the growing partisan divides regarding Trump’s role in the events or whether rioters should be prosecuted.

Largely forgotten—unless we look back at countless photos and footage of the violence—are the Christian banners and flags, the wooden crosses, the impromptu praise and worship sessions, the “Jesus Saves” signs, the Christian t-shirts, and the infamous corporate prayer in Jesus name in the Senate Chamber. Having stormed the sanctum of American democracy, the “QAnon Shaman” thanked God for “filling this chamber with patriots that love you and that love Christ,” allowing them to send a message to their enemies “that this is our nation not theirs.”

For several years we’ve measured Christian nationalist ideology by asking Americans a series of questions like whether they believe the government should declare the U.S. a Christian nation, or whether they reject the separation of church and state, or whether they think America’s success is part of God’s plan. We call those who score roughly in the top 20% of our scale “Ambassadors” of Christian nationalism. They are the true believers. That is around 30 million adults. And our recent findings suggest they’re growing more accepting of the insurrection on January 6th.

In February 2021, we asked Americans for their thoughts about the Capitol riots. Then we queried those same Americans seven months later in August to see how their views shifted. Within that time, the percentage of white Ambassadors who felt the rioters should be prosecuted dropped over 22 points from 76.3% to 54.2%. Even more striking, the percentage of white Ambassadors who said they stood on the side of the rioters doubled from 13.6% to over 27%.

Why did these white Christian nationalists start to identify more with the rioters? Our August 2021 survey suggests several reasons. First is loyalty to Trump. Nearly 92% of white Ambassadors voted for him in 2020. And compared to roughly 36% of Americans who believe the Presidential election was stolen from Trump, nearly 2.5 times that percentage of white Ambassadors (86%) held this view in August.

But why are they still so convinced the election was a sham? In several studies we and other scholars have shown that Christian nationalism seems to incline white Americans toward baseless conspiracy theories. For example, in our August 2021 data we find that half of white Ambassadors believe falsely that the COVID-19 vaccines have themselves killed hundreds of people. And less than one third were willing to reject the outrageous QAnon conspiracy about government elites running a Satan-worshipping, pedophile, sex-trafficking ring.