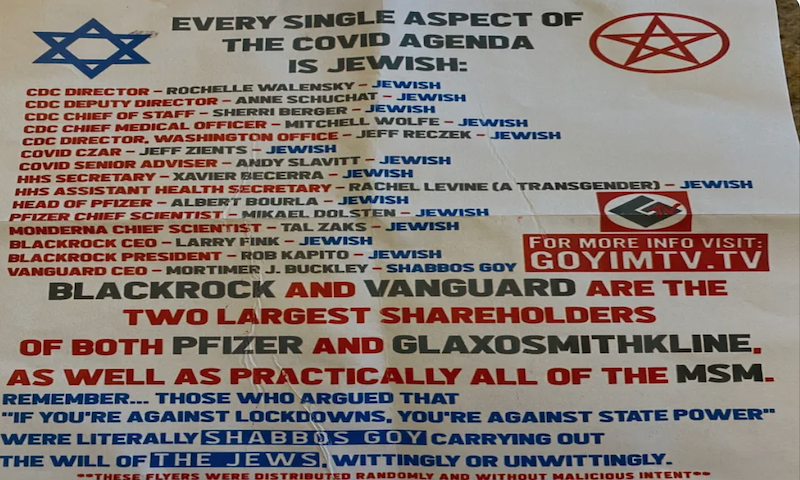 ADL - White supremacist propaganda, which allows extremist groups to disseminate hateful messages and gain attention with little risk of public exposure, has been on the rise for several years. In 2021, the overall numbers were down slightly, but paired with a 27 percent increase in antisemitic content and messaging.

Since 2017, the ADL Center on Extremism has closely tracked white supremacist propaganda incidents including the use of racist and antisemitic fliers, stickers, banners and posters, as well as the use of stenciled graffiti.

While propaganda numbers remain historically high, the 2021 data shows a five percent drop in incidents from the previous year, with a total of 4,851 cases reported, compared to 5,125 in 2020. Year over year, the number of propaganda incidents on college campuses dropped 23 percent, from 303 to 232, the lowest since ADL began tracking incidents in 2017.

The high number of antisemitic propaganda incidents have continued in 2022. In January and February, the virulently antisemitic Goyim Defense League dropped antisemitic leaflets on college campuses and across entire neighborhoods, with dozens of incidents reported in at least 15 states.

In January-December 2021, propaganda was reported  in every state except Hawaii, with the highest levels of activity (from most to least active) in Pennsylvania, Virginia, Texas, Massachusetts, Washington, Maryland and New York. ADL’s H.E.A.T. Map provides a visual representation of the propaganda efforts by geographic location and can be used to track other specific trends.

In 2021, white supremacists used propaganda to spread hate, promote themselves, attack their perceived enemies and present themselves as victims of an “anti-white” society. In some cases, they used current events to legitimize their hateful views. Shortly after the insurrection against the U.S. Capitol, white supremacists created propaganda pieces presenting January 6 insurrectionist Ashli Babbitt as a martyr for their cause. Similarly, they threw their support behind Kyle Rittenhouse, creating propaganda claiming “Kyle was right.” And, in the wake of the deadly holiday parade attack in Waukesha, Wisconsin, white supremacists leveraged the tragedy by sowing racist and antisemitic conspiracy theories on the ground and online.