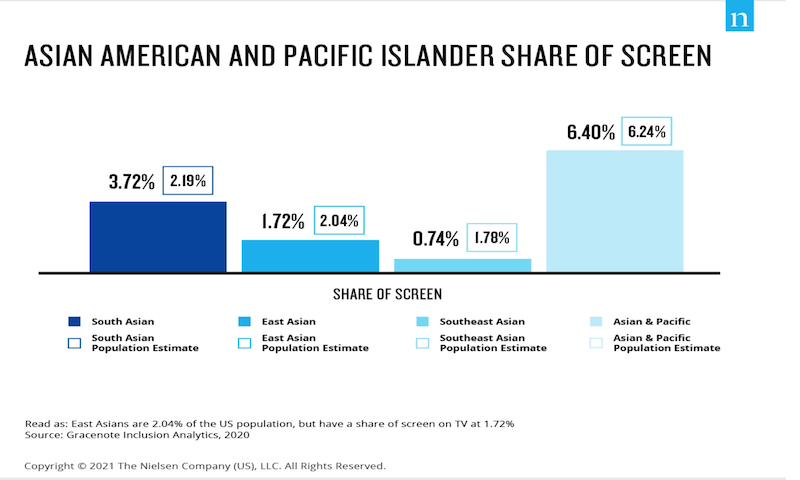 Nielsen - From attacks on Chinese laborers in 1885 to the more than 3,000 anti-Asian hate incidents in the last year, attacks against the Asian American community are not new. But while this is not the first time in U.S. history that the Asian community has been subjected to violence, recent research shows the quantity and context of inclusion on TV for an identity group plays a  role in learning—and unlearning—racist stereotypes that harm Asian Americans.

One clear challenge to disrupting stereotypes is the exclusion of diverse Asian American experiences from U.S. television content. Add amid the disruption of production schedules during 2020, Gracenote Inclusion Analytics reveals that share of screen* for Asian American and Pacific Islanders (AAPI) remains limited. Particularly, East Asians and Southeast Asians appeared in leading roles on TV at a fraction of their presence in the U.S. population.

After more than a year living with the disruption and threat of COVID-19, our increased media consumption still offers two primary parallels of representation for Asian American and Pacific Islanders (AAPI) on television—news headlines and commentary stigmatizing the pandemic as the “China” or “Wuhan” virus and television roles that perpetuate the “model minority myth.

But representation in TV programming isn’t the only place where progress is needed. A recent study published to PubMed by a group of academics found that increased media rhetoric in response to the pandemic has played a direct role in the escalation of violence and bias against Asian Americans. Researchers found a direct correlation in the increased media usage of terms like “China Virus” and “Kung Flu” with the increase in bias against Asian Americans. So much so that after years of declines of this sentiment, the initial weeks of pandemic coverage using this racist language in the media was powerful enough to erode more than three years of prior declines. This language directly evoked and activated a long historical legacy associating Asians with disease and xenophobic fear dating back to the “Yellow Peril.”